Fall 2015 graduate Philipp Lindemann reflects on his time at NC State University and how the arts on campus made his experience. 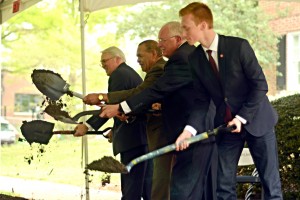 Pictured: Philipp Lindemann and other campus leaders at the groundbreaking ceremony for the Gregg Museum of Art and Design

I have yet to fully realize and process that I am graduating, and a semester early at that! Before I went to sleep, the evening before I  finished my last exam, I took some time for a good period of nostalgia. When looking at my undergraduate career as a big picture, three-and-a-half years is not a lot in an average person’s lifetime, but these years here at N.C. State have been so rich with experiences. The idea of graduating feels so immense because I am closing a truly incredible chapter of my life, filled with moments I will never re-experience, yet I am glad that I did. Working at D. H. Hill for over two years, being part of award-winning films at Campus MovieFest, speaking at the new Gregg Museum’s groundbreaking, attending basketball and soccer games, being a part of Arts NC State and University Theatre, networking with many of our campus’s important contributors– these are just a fraction of what defined my time as a member of the Wolfpack. Yes, I have been privileged with a lot of opportunities, but I would not be where I am now without the people around me: my family, my friends and the many other people I have met down the road. Their trust, presence and support have shaped me more than anything else, and I hope to be able to return the favor someday.

What was it like to receive the performing artist award? How did you prepare for the role? What did you do with the cash?

It was in April of this year, at University Theatre’s annual Hammys Awards gala, that I found out about the Performing Artist award. John McIlwee announced that there would be two winners, which made sense. There had been one or two incredible performances in every show we had done that season. My friend, Blair Downs, received the first award, and then my name came up. I can’t remember much of what followed. All I recall is being shocked. I thought other people delivered much more deserving performances, but I guess that shows how subjective theatre can be.

Before The Burial of Thebes, the last show I was cast in was An Inspector Calls two years before. Those two years in-between did a lot for my development as an actor, though. I read a lot of books on acting theory by teachers like Konstantin Stanislavsky and Michael Chekhov. I read a lot of works by Bertolt Brecht, Sophocles, Euripides, Shakespeare, Arthur Miller, Eugene O’Neill and many other renowned playwrights. I also watched a lot of performances in the Triangle area. Developing in art comes not only from performing, but through researching and observing the world and works around you, too, and during those two years I finally found my style to applying that. I have been using this new foundation as my means of approaching theatre ever since, and I am a lot more satisfied with the characters I create and the performances I deliver. Creon of The Burial of Thebes being one of them.

And the award money? I used the award money to pay off a bit of my college loans. It was between that and a pair or two of shoes. Anyone who knows me knows how difficult that choice really was.

How did your experiences as an international student, culminate in your attendance, and ultimate graduation from NC State?

I could write a book about this and go on and on about the psychology of Philipp as it has been shaped by being German in America, but I also can’t seem to find a proper way to answer this question concisely. My experiences have shaped me to be open-minded about people, cultures and differences in opinions. Integration has also been easier.

What was it like being on the FANS (Friends of Arts NC State) board of directors?

Being part of the Friends of Arts NC State (FANS) Board was eye-opening. When Alex Miller offered the opportunity to serve as a student representative, I had no clue what to expect. Suddenly, I was surrounded by people in our community who have a lot of say on how and where Arts NC State develops as a university program. Their service and dedication to ensuring arts advancement in higher education is to be commended and recognized. The individuals on this board are some of our biggest supporters! Cocktails parties with Arts NC State donors and community arts leaders are fantastic. The drinks and hors d’oeuvres are always on point. Plus, the people are full of stories and can talk forever, which I do, too, sometimes, so it’s one hell of a time!

What’s next? How will you stay involved in the arts while you’re busy being an adult?

What am I doing post-grad? Crying. Just kidding– well, maybe.

I am figuring things out, engaging in projects and expanding upon my interests and opportunities here in the area. I had the amazing opportunity to go to Chicago and join one of the most prestigious law firms in the country, but given the conditions and circumstances that came with the offer, I turned it down. While I have burning ambitions to depart the state and country once more, there is the time and place for everything, and I recognized opportunities for growth within a closer vicinity that were too enticing to leave behind. That said, I am currently with a political campaign for the North Carolina House of Representatives as an operations officer, led by my roommate and colleague from Lillian’s List’s Jamie Kirk Hahn Academy. Raleigh’s Fossil also took me in as a visual merchandiser, and associate, and I am on the management track as sales leader for American Eagle Outfitters in Cary.

It is a workload that is diverse and intensive, but these are conditions I have found to thrive best in, and, ultimately, I enjoy it. I am going with the flow, making the best of things and continually looking for opportunities to capitalize on, much of which has been made possible thanks to the support of family, friends and colleagues around me. I would not be where I am without them.

Of course, my attention has not swayed from the arts. Right now, I am looking to audition for TheatreFest 2016 and have an offer to be represented by Modelogic RVA. Creative work has been apart of me so long that it is not something I plan to let go of just because I have graduated college. I am going to continue it as a lifelong experience in all areas, whether it be broadening my education or enhancing my practical skills.
In the long-term view of things, I have slowly started to study for the LSAT. My goal right now is to attend law school by Fall 2017, focusing on public international law, with an even more specific emphasis on human rights law. My life and travels around the globe are playing a huge role in my career ambitions. The humanitarian work of notable public figures like Bill Gates, Nelson Mandela, Martin Luther King, Jr. and Bill Clinton, as well as lawyers such as Amal Clooney, also serve as the paradigms I want to emulate. I wanted to join the U.S. Peace Corps after graduation, but because I am not a U.S. citizen, this was not a possibility for me. With a Juris Doctor degree in a equally impactful field, I want help win the small and large victories towards securing and protecting basic freedoms and safety for the multitude of people around the world that do not have it. It will be a tough, studious path to climb, but with self-belief and the support around me, there is little that is impossible.

Lastly, do you respect Kanye as an artist?

I won’t lie to you, the artistry of Kanye West is often on my mind (probably because a lot of his songs are on my workout playlist). If you take away the ego and the questionable choice in baby names, you have an award-winning artist who incorporates a different musical influence in each album, is seen as an industry role model by up-and-coming artists as well as several greats, and has a part-time gig as a fashion designer. This is the talent that got him to where he is now. i don’t just respect Kanye as an artist, I look up to him when it comes to creative writing. I’ll close out this email with a stanza from “Heard ‘Em Say:”

“They say people in your life are seasons,

And anything that happen is for a reason,

And … guns a clappin’ and keep to squeezin’,

And Jesus and one day that ya see Him,

Till they walk in his footsteps and try to be Him,

The devil is alive I feel him breathin’,

Claimin’ money is the key so keep on dreamin’,

And put them lottery tickets just to tease us,

My aunt Pam can’t put those cigarettes down,

His job trying to claim that he too …ish now,

Is it ‘cuz his skin blacker than licorice now?

I can’t figure it out…

We at Arts NC State wish Philipp the best in the future. See you soon, friend.