Giving towards a better future 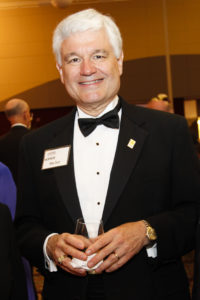 Alumnus Mike Davis ‘73 encourages his fellow alumni and community members to contribute on Day of Giving and share in his pride for Arts NC State.

Mike Davis ‘73 has supported Arts NC State for decades. Like many alumni, Mike was drawn to Arts NC State by his experiences as a student playing in several music ensembles, including the Marching Band. Yet his interests soon blossomed to include all of the arts programs.

He attended NC State LIVE performances regularly. He speaks with admiration for the student performing arts programs. He attends the Crafts Center Fair every November. Mike became so committed to Arts NC State that he joined the Friends of Arts NC State Board of Advisors, eventually rising to serve as its chair. Mike served on the board during a pivotal time for Arts NC State, when its visibility on campus grew tremendously.

Mike contributed to the renovation of Thompson Hall and helped plan the initial phase of the Gregg Museum of Art & Design building campaign. Though Mike’s board service concluded in 2010, he and his wife, Terry, remained involved and donated regularly. Then in 2019, Mike retired and considered the legacy he wishes to leave behind. “Leaving something behind so people will remember you is a good thing,” Mike concluded. Mike chose to establish a scholarship endowment for Arts NC State with a major planned gift. “I’m proud to have been part of the growth of Arts NC State,” Mike says. Now, with his endowment gift, Mike will forever be a part of Arts NC State’s future as well.

Learn more about supporting the arts on Day of Giving