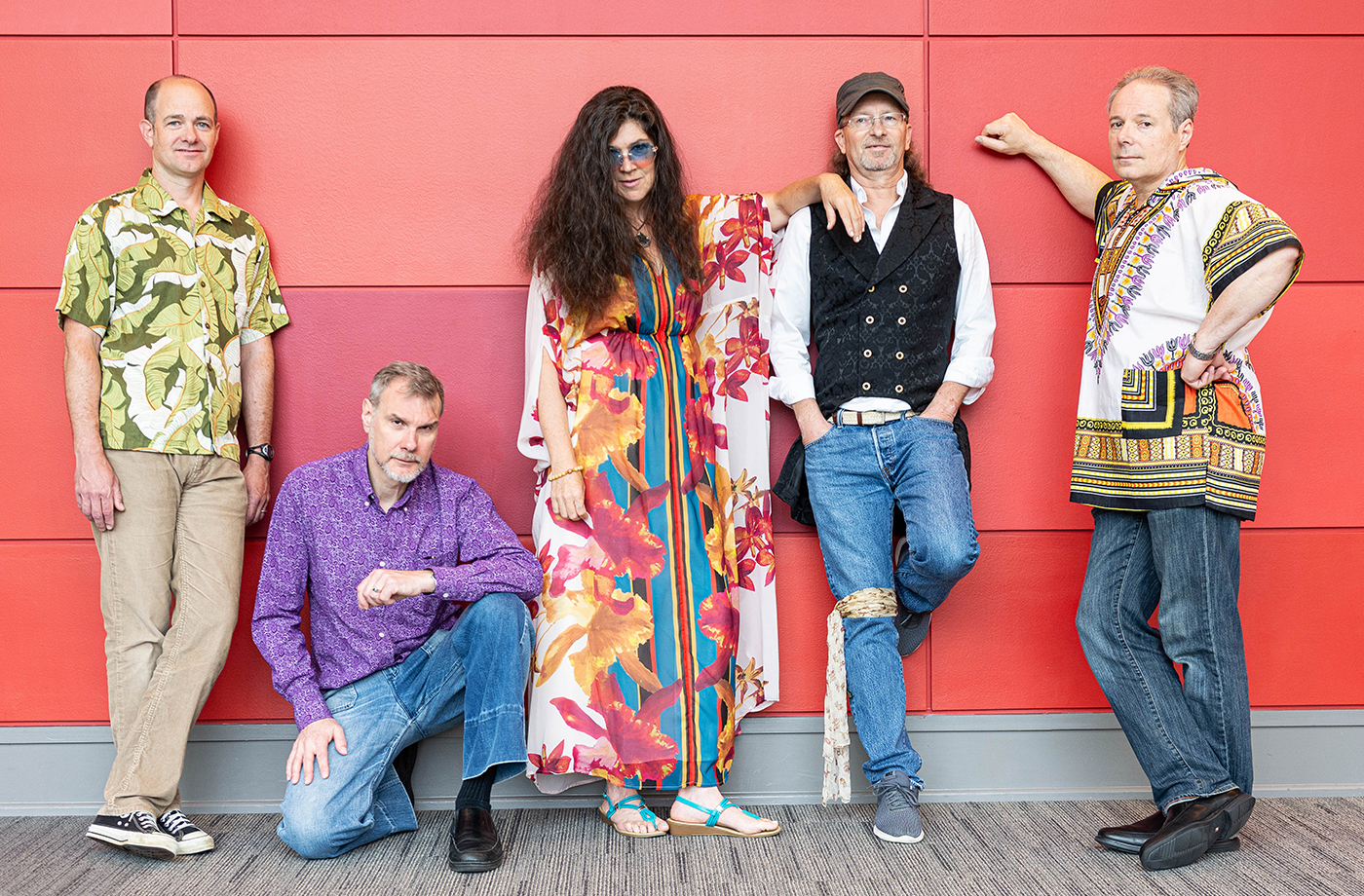 While the 1969 “aquarian exposition” on Max Yasgur’s farm in upstate New York can never be completely recreated, it most certainly has become legendary to music lovers and cultural historians the world over. With August 2019 being the 50th Anniversary of the treasured festival, there are several Woodstock-related events planned throughout the country, including right here in Raleigh, featuring NC State University’s own faculty rock band, The Quadrivium Project.

On August 16 you can join The Quadrivium Project at Raleigh’s Lincoln Theatre as they perform the show they’re calling “Woodstock and Beyond: Songs of Love and Protest.”

Why the beyond? Drummer and co-founder Rich Holly explains, “Early in our planning we recognized that there was also a Woodstock ’94, and that two weeks after the original Woodstock in 1969 there were two other festivals with hundreds of thousands of people in attendance – they just got very poor media coverage because Woodstock was still dominating the press two weeks after it was over.” Holly says these other festivals provided an opportunity for The Quadrivium Project to introduce the audience to some cultural facts and bands they might not be as familiar with.

As Gary Beckman, guitarist in the band, tells it, “The importance of the 1994 Woodstock 25th anniversary concert is that it reminded us to continue celebrating love and calling out injustice. Perhaps both love and protest are best discussed musically?”

Woodstock featured 33 bands and 300 documented songs. Woodstock ’94 had 71 bands, and in 1969 over the Labor Day weekend the Texas International Pop Festival had 26 bands and the Isle of Wight Festival had 10 bands and several notable guest artists. All told, that’s probably 1,000 songs. How does a band, scheduled to play a two-hour show, decide which twenty or so of those songs to play?

Holly, who is the Executive Director for the Arts at NC State, chuckles and says “Yeah, that’s the greatest challenge of being in a band where we all have different backgrounds, likes, and dislikes. But the beauty of it is that in The Quadrivium Project we all like and respect each other so well that our trust level is very high, and we’ve come to appreciate that the first thing we need to consider is vocals. There’s not a single singer on the planet who can sound like 100 other singers, so vocals is our first consideration, and the easiest way for us to pare down the list.”

Co-founder Gary Beckman concurs. “It’s a real privilege being in The Quadrivium Project. I get to make music with colleagues and friends I truly love and respect. And,” he smiles, “they’re very nice when I play too loud…they turn it up, too!”

The members of The Quadrivium Project grew up with various levels of familiarity with the music of Woodstock. How does this affect the band’s ability to pull off a show like this? Bassist and professor in Health and Exercise Studies Tommy Holden tells us he’s “…really excited to explore the music of Woodstock and these other festivals. Like many listeners, I’ve heard many of the songs we are playing but now I’m able to dive into the meanings of the tunes and the technical aspects of the songs. The exploration of the music from these festivals gives me a new appreciation of what was the inspiration for these songs, whether that be protest, love, or technical prowess.”

And speaking of technical prowess, The Quadrivium Project has been known for their tech-heavy performances, featuring the music of groups like Genesis, Yes, Led Zeppelin, and Rush. How does technology play a part in what we think of as more raw performances, such as those from Woodstock?

Tom Koch, Associate Director of the Department of Music and keyboardist in the band, explains “The sheer diversity of musical styles presented in this show means that the sets never become predictable or mundane. Because this music concentrates on festival music of the late ’60s and mid ’90s, I have greater opportunity to experiment with a single keyboard instrument – the Nord Stage 3 – to capture the sounds of studio and live technology that was constantly evolving over the span of those 25 years.”

The band has been performing the past few years most commonly on the campus of NC State University, in the well-suited Stewart Theatre, which affords the band the opportunity to enlist the help of several students on the production side of things. This year’s show at Lincoln Theatre will be the group’s second foray into Raleigh’s noted rock venues, having played at King’s last January.

And what’s up with the band’s name, The Quadrivium Project, you might ask? As the members of the band explained, if you studied at university in Europe about 700 years ago, you would have studied the four subjects of arithmetic, geometry, astronomy, and music – known as the quadrivium. With NC State’s strong reputation as a STEM institution, the institution’s serious musical presence makes an excellent argument for bringing back the quadrivium.

Asked how meaningful an evening of Woodstock-related and Woodstock-era music is to the band members, all clearly have musical affinities that come from different sets of circumstances yet are all deeply imbedded.

Singer Kate Annett-Hitchcock, a fashion professor in the Wilson College of Textiles, first explains the broader view for us. “Music is my release and my refuge,” she says. “It has been part of my life since the age of 7 when I first performed in front of an audience. Even though it’s not literally my bread and butter, it is my spiritual sustenance. How can the sweetness of a single tone change your entire mood? It’s a truly magical thing. Being in this band and on The Quadrivium Project journey has also been magical, I feel blessed and spoiled rotten all at the same time, and I’m so glad we can bring new and old audiences to this music so they can share the experience.”

Keyboardist Koch says “Like most Gen X musicians, I have a spiritual affinity with Woodstock, even though, and especially because, I don’t remember the events personally. But I grew up watching the grainy videos, listening to the scratchy LPs, and identifying with my musical heroes, so I experienced a certain nostalgia for this era that fundamentally reshaped our culture and traditions.”

Holly, who admits to being the oldest member of the band, says he was a little too young at the time of Woodstock to go, “…but my older sister had a few friends go, and they came back with some incredible stories. I could see the joy and amazement in their eyes as they talked about being there. When the LP records of the festival came out, my friends and I pretty much wore out the grooves on those records as we transcribed and played along to most of the songs on it. As a young drummer, I was heavily influenced by Santana’s Michael Shrieve, the Who’s Keith Moon, and particularly Mitch Mitchell, Jimi Hendrix’s drummer. So, for me, it’s exciting to be bringing some of the great songs from Woodstock to our friends in Raleigh.”

And Beckman, who is the director of the Entrepreneurship in the Arts program at NC State, gets excited when he says “The highlight in our 25th anniversary set for me are the King’s X tunes. That band was the runaway favorite the first night of the 1994 festival – music critics from all corners were raving about their performance. It’ll be great to introduce our Quadrivium Project audience to their music on the 16th!”

Kate shared that she has two favorite songs to mention. Noting that a Woodstock-themed show wouldn’t be complete without a version of the Joni Mitchell song “Woodstock,” she says “Yes, the Crosby, Stills, Nash & Young version rocks hard and is so much fun, yet Joni’s light but meaningful treatment is a testament to her genius songwriting and her ability to capture emotions and in this case, an entire zeitgeist. Even more amazing when you realize that she wasn’t able to attend the event, and wrote the song based upon the impressions of her then-boyfriend, Graham Nash.”

Sharing excitement about the music of the 1994 Woodstock festival, she continues, “You know, when I was a kid growing up in the UK in the ’70s, my family’s daily activities were to a large part controlled by the agenda of the Irish Republican Army and their fierce struggle for an independent Ireland. It took the song ‘Zombie’ by The Cranberries to help me understand the other side of the story and to realize that hatred is neither a viable mindset nor a sustainable remedy to a problem.”

Drummer Holly notes “Well, I can’t improve on the depth of meaning of Kate’s response, which I agree with, but as a drummer having heard the original Woodstock music now for 50 years, I’m really excited to play ‘Soul Sacrifice’ by Santana.”

And that’s pretty much what the August 16 “Woodstock and Beyond” show at Lincoln Theatre is all about – meaning and excitement.

Tickets for The Quadrivium Project’s show “Woodstock and Beyond: Songs of Love and Protest” are available through Raleigh’s Lincoln Theatre.