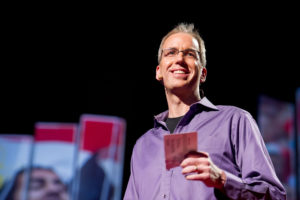 Frank Warren is the most trusted stranger in America.

He is the creator of The PostSecret Project – a collection of 1,000,000+ artful secrets that have been mailed to his home on postcards, anonymously. The PostSecret website has become a phenomenon in itself, earning over 700 million views, and making it the world’s largest advertisement-free blog.

In collaboration with NC State LIVE, Frank will join us for a lively lecture based on his popular TED talk. Come see the postcards that were banned from his six best-selling PostSecret books. Hear the inspiring stories behind the secrets. Listen to some of Frank’s favorite secrets…and share your own.

Since the fall 2017 semester, the Crafts Center has been collecting PostSecretU postcards from across campus and around the community as part of what we have subtitled, “PackSecrets.” These cards reflect everything from humor to despair – an index of what is going in the hearts and minds of folks right here on campus.

The result is a modular installation of campus-generated secret cards that will be exhibited in the Crafts Center gallery, on view through fall of 2018.

At times hilarious and heartbreaking, the secrets reflect complex issues that many of us struggle with: intimacy, trust, meaning, humor, and desire. This talk is scheduled as part of National Suicide Awareness Month. Need to talk? The NC State Counseling Center will be on hand in the lobby after the event and is available at 919.515.2423