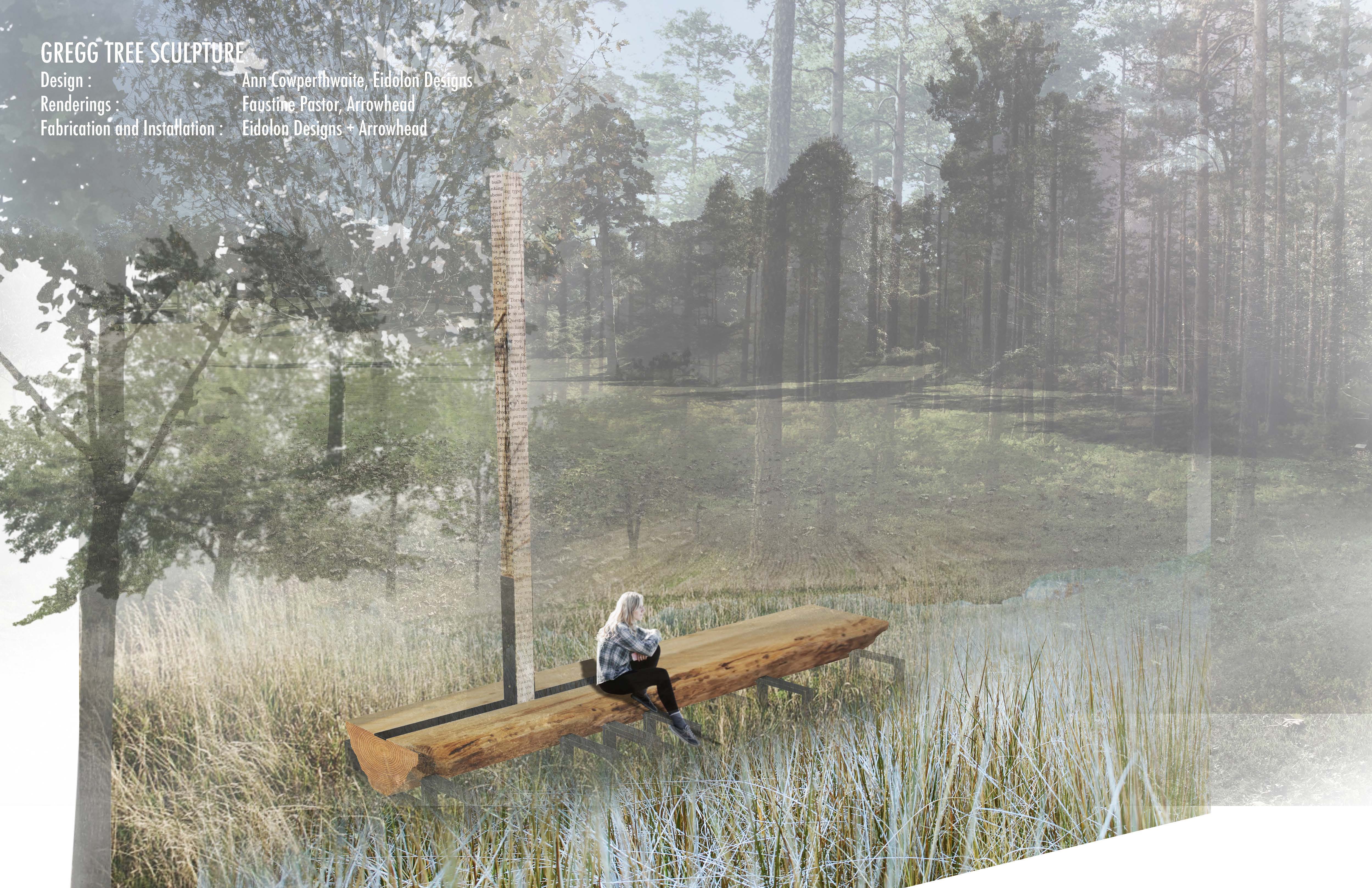 Local Artists and Designers to Collaborate on Environmental Art Project to Acknowledge Growth in Raleigh, Explore Human Relationship with Progress and Nature

The Gregg Museum of Art & Design, Eidolon Designs, and Arrowhead Designs are pleased to announce the collaboration and design of a sculpture to honor oaks that once stood on the site of the new museum on Hillsborough Street slated to open in late summer of 2017. Gregg Museum supporters and local volunteers are raising funds for the project and hope the sculpture will add another element to Raleigh’s environmental arts scene while demonstrating a reverence for the trees.

“The new Gregg will be a prominent feature of Hillsborough Street, and we are excited and honored that the community is rallying around the Gregg Tree Project,” said Gregg Museum Director Roger Manley.

Inspired by the Environmental Art Movement, which began in the 1960’s and is regaining popularity, the project will re-imagine two grand oak trees that once stood on the property, which was the site of the historic Chancellor’s Residence for decades until it was relocated to Centennial Campus. Manley and members of the Friends of the Gregg Board became committed to revering and re-purposing the oaks after learning during the planning process that the trees would be unavoidably lost.

“The goal was to find someone who could help us repurpose at least a significant portion of the trees,” said Director Manley, “so that their presence could keep on giving something vital to the landscape.”

Through a juried selection process, the Board chose a design by Ann Cowperthwaite of Eidolon Designs. Eidolon and local firm Arrowhead Designs are longtime friends and had been searching for opportunities to collaborate. “This project offered the opportunity to combine generational friendship with experience, technical skills, and artistic vision. We know that with growth comes inevitable impacts to the environment, and we love the idea of deliberately re-purposing the trees, rather than running them through the woodchipper and turning them into mulch,” says Justin Johnson of Arrowhead.

“The Gregg Tree Project honors the past, celebrates creativity, innovation and community collaboration – all which embodies the spirit of NC State’s new Gregg Museum of Art & Design. Many thanks to these artists for their enthusiasm, talent and vision to create a meaningful sculpture to grace the new Gregg,” said Shawn Brewster, President-Elect of the Friends of the Gregg Board.

Local filmmaker David Hambridge will document the design and installation process over the next several months, and community volunteers are rallying for local support to help fund the project.

“I’ve been lucky to be surrounded by people like Ann and Justin who want to curate the environment they live in through designing and actually building it.  As a filmmaker, that is a fascinating idea to play with.  They both have great stories along with a fervent drive towards creating.  I just want to witness this collaboration with the Gregg and share that story along the way for people to watch,” said Hambridge.

Once project volunteers can raise funds, the sculpture will be undertaken and unveiled during the April 2017 Gregg opening. The sculpture and will feature a bench with a vertical column rising skyward. Spiraling up the column in words sandblasted into the wood, will be a Rainer Maria Rilke poem, reading from bottom to top, earth to sky, posing an eternal question of our individual quest.

“The spiraling words are meant to draw eyes and lift the face upward, as the motion of vision when following the reach of a magnificent tree, making the connection from earth-rooted to open sky–the most positive of human postures,” says Cowperthwaite. “Perhaps, in the best case scenario, the sculpture will remind us to pay attention to the growth, decay, or destruction that happens around us constantly, so that we might be compelled to reuse, recreate, or even better, find ways around destruction of the natural environment.”

The project members and artists are working to garner local support and will kick off their campaign to raise funds. “We have already received so much encouragement for this project, and we’ve had some amazing conversations over coffee in the studio about this project and future collaborative art efforts. Raleigh cares deeply. Folks here are so excited about the growth, but they recognize that sometimes trees have to come down. This gives us all a way to demonstrate a respect for, and commitment to, the trees that have been here much longer than we have,” says Cowperthwaite.

The project has kicked off an Indiegogo campaign to raise funds, which are fully tax deductible (through a partnership with Fractured Atlas). To support the project or volunteer, visit www.greggtreeproject.com.

Ann Cowperthwaite and Mike Parker co-founded Eidolon Designs, which has over three decades of experience in fine craftwork and sculpture. Additionally, Eidolon is a foundational member of the local design and craft community, and, as such, will be similarly foundational in engaging Raleigh in this endeavor. www.eidolondesigns.com

David is a commercial and documentary filmmaker currently based in NC – his interest lies in personal, truthful, and highly intimate storytelling.  His approach relies heavily on mutual trust between the filmmaker and his subjects, which over time produces honest, personal moments on screen.  He has run a successful Kickstarter campaign along with other fundraising sources to support his documentary filmmaking efforts. Currently, David is the director for the feature-length documentary film “The Last Male Standing” about the last male northern white rhino in the world and his caretakers, set to release Fall 2017. (www.thelastmalestanding.com)