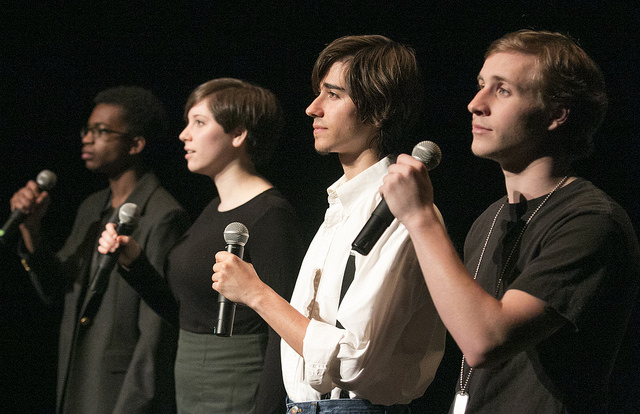 Last week, University Theatre produced the winning play for the 2015 Creative Artist Award: INK by student Will Stewart. Read the Technician’s review of INK here. Our Arts Outreach Student Asst. Areon Mobasher asked Will a few questions about the process. Winners of the 2016 Creative Artist Award will be announced prior to April 25th on our website.

Will: Electrical Engineering with a minor in Creative Writing

What inspired you to write “Ink?” Why this style rather than a traditional dialogue or plot-driven play?

I knew that I wanted to write a play involving poetry, specifically spoken word poetry. I originally wanted to write something similar to a musical, but instead of songs they would be poems. However, as I started selecting and writing pieces to include in the play, that vision changed. I noticed that there were many similar ideas, literary devices, images, etc. between them, and I started to see it more as a theatrical version of a poetry slam, something that captures the beauty of everyday people expressing things that they are passionate about, things that are personal and meaningful to them. So it evolved into a series of vignettes, a character portrait rather than an explicit story, and it seemed to fit with the spirit of poetry.

There were two production processes for this play. Last semester we held a staged reading which was essentially a workshop process for the script. I had a lot of agency in casting and design, and essentially felt like a second director. However, in the full production put on this semester, I consciously decided to take a step back and let the work take on a life of its own. I gave some input, especially in parts that were important to me, but I largely stayed un-involved because I didn’t want it to be about my vision, I wanted it to be about the piece and what it meant to everyone else involved, which is, I think, more in the spirit of the piece itself.

Is there a difference between the show you wrote and the show that was performed?

The show that I wrote was basically just a poetry slam on stage, but I think that Rachel and the rest of the people at UT really transformed it into something so much deeper and more powerful. My vision was not very theatrical, but they turned it into a play, and it put everything in a totally new perspective that was refreshing and exciting.

What ignited your love for poetry and spoken word?

My senior year of high school, I had an English class taught by the staff adviser of the school’s poetry club. She was also working with a student, Aaron Kreizman, on an independent study based around spoken word. I’d known Aaron for all of high school but had never really been friends with him. One day, he asked to perform a piece during our class in order to get feedback, and he performed a poem about a mother receiving news of her son’s death in war overseas from the perspective of a doorbell. It was unlike anything I’d ever heard, and it totally blew me away with just how powerful it was. That night, I wrote my first slam poem, and began regularly attending poetry club meeting every week. I even wrote a poem years later about the day that he performed and how strongly it impacted me.

What play (or poem, musical, screenplay, etc.) do you wish you had written? Why?

There are a number of things I wish I had written, but I think the one poem I envy the most is OCD by Neil Hilborn. It went viral a few years ago and it’s always inspired me. As someone who has struggled with ability to write love poems that aren’t cliche and don’t suck, his voice and his perspective are so real and meaningful. He wrote the love poem I’ve always wanted to write, and i wish I’d gotten to it first.

Whose work do you admire most?

Again with the questions that have a thousand answers. I suppose in regards to poetry, the person whose work I admire most would be that of my mentor, Kane Smego. I often cite him as my favorite poet, and he’s done so much work for the community and for the world and reflects such a wisdom and understanding in his poetry that has always moved me. Having had the opportunity to learn from him first hand has always been one of the experiences I’ve been most proud of.

What was your greatest challenge during the production process?

The hardest part was hearing others speaking and interpreting and analyzing my words. Those pieces are so personal to me, and every night seeing them onstage I felt so vulnerable and anxious. It was beautiful and enlightening, but also terrifying. Conversely, the most meaningful thing that came from the production was hearing responses from the audience that they could relate, that they understood or were moved by my words. That’s a feeling that’s so humbling and means so much to me.

What is most helpful to you when sitting down to write a poem? Or, in this case, a play?

Focus is more important than anything. Even if I’m feeling inspired, if I can’t sit down and focus on what I’m doing I’ll never be happy with it. I’m the kind of person who has to complete something when he sits down to write it, so I need to be able to direct my energy fully into the poem so I can finish it and bring the ideas together, otherwise I flounder. The same held true when compiling and writing pieces for this play. It was partially constructed out of poems that I had written previously and partially by new pieces, so whether it was deciding how to tailor a piece to a character or situation, how to order the pieces, or what to write about in a new one, I needed to be in the right headspace and clear out distractions to get there.

Do you plan on developing “Ink” further, or are you moving on to other projects?

I would love to pursue Ink further. I had a lot of ideas that I wanted to implement after the initial workshop process but was never able to, so I would like to explore those avenues. I would also like to pursue publishing opportunities. So basically I’m gonna take it to Broadway next (that was a joke).