The Creative Artist Award: Behind the Scene 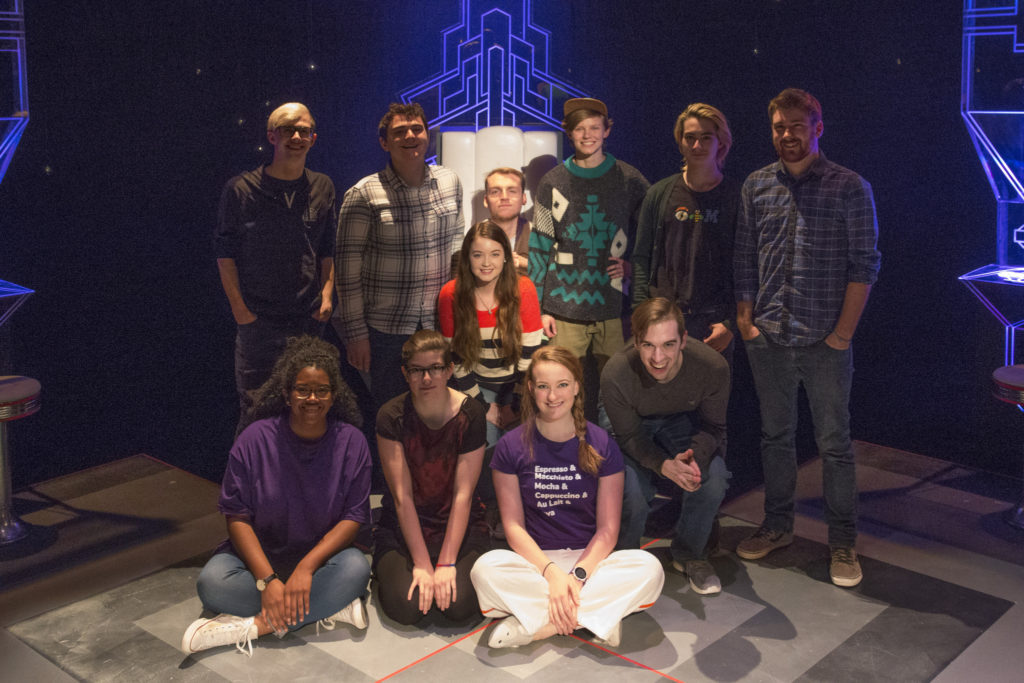 The cast, crew & playwright of Girl in Space

Rehearsal started on a rainy Monday, but everything started a long time before that. It was in April of last year that Peter Lalush learned his script, Girl in Space won the Creative Artist Award, and for the past four months every Friday a group of dedicated students met to discuss this opportunity of a lifetime. The Creative Artist Award is an endowment created in 2013 by Suzanne Kennedy-Stoskopf, a professor in the School of Veterinary Medicine and an NC State Alum. As an Arts NC State intern, I conducted an email interview with Suzanne, in which she stated, “My inspiration came from the Student Art Purchase. Visual art is tangible, there is something to see. Creating a play, a musical composition, or choreography is an idea in a person’s mind until it can be tangibly captured and performed. There were no outlets for this creativity of the mind to become a reality. I wanted our students to explore these avenues of expression.”

At first only plays were submitted, but in the past two years other avenues to submit work in music, dance, and arts have emerged to cover all aspects of performing arts. The main star tends to be the full production of a student’s winning play. To go along with a student written piece is a student created production produced by University Theatre. Five hundred dollars is awarded to the student winner, and another stipend is awarded for the production costs of the play. Not only is this an unmatched opportunity for up-and-coming playwrights, but it presents a chance for other students to get involved in career-making moves.

Girl in Space broke a few records within University Theatre (UT). In the past there have been student directors, but this was the first Creative Artist Award that was fully student directed. More so, the lighting, sound, set, and wardrobe was all student created. It is also the play that had the fewest actors involved—two: one on stage, and another a voice off-stage simultaneously working a light-box without flaw. Eleven students worked together to bring Girl in Space to live, and I had the opportunity to sit in on a small part of the process.

It was the Wednesday after Spring Break I got to see the final production, and even though I witnessed the rehearsal previously, I was floored at the quality of the production. The play may have been on a smaller stage, but it held its ground against the larger University Theatre Productions. With a run time of 45 minutes without intermission it felt like only 10 had past because of how much I laughed. I’ve seen several UT plays, and in all honesty this is one of my favorites. Once the play ended I was more than excited to sit down in the familiar leather tan couches by the fireplace and talk with the entire cast and crew.

Each student had a UT mentor, and in the case of Lindsay Veros, the student director, that was Mia Self. “My favorite part was when we were at the second meeting for this event, and as the staff were about to leave we saw the students gather around each other and have the same exact conversation that the staff would have: asking what are you most excited about with the creative process and what not. “They are learning to work with real budgetary restraints,” said Mia. There was an overall consensus I had gotten from the eleven students: this was an incredible opportunity and that acrylic was a pain. Rebecca Freer, the costume designer of Girl in Space, is now being considered for an internship because of her work with the play. “This is something I want to do as my career, and this was a great resume builder. I really learned how to work in a group of my peers.” Natalie Sherwood, the sound designer, also agreed. Natalie spoke reflectively, and a sense of pride for their accomplishments could be found in their voice, “[We were] Treated as true peers and have our ideas valued within this creative process.”

Things got interesting once I asked about challenges brought about from the play. Peter Lalush had his own difficulties before he even won the award. Peter has a background in screenwriting, which he didn’t have much faith in being able to switch to being a playwright. Before he started he kept telling himself he couldn’t write a play for months. “Plays are just a lot different, with movies you can control what people are looking at. With plays people can choose what they want to look at.” Peter described how he thinks visually, so before he could begin he needed to think of one set area for the play to take place in, which was different than the finalized production, but something he was much happier to see. 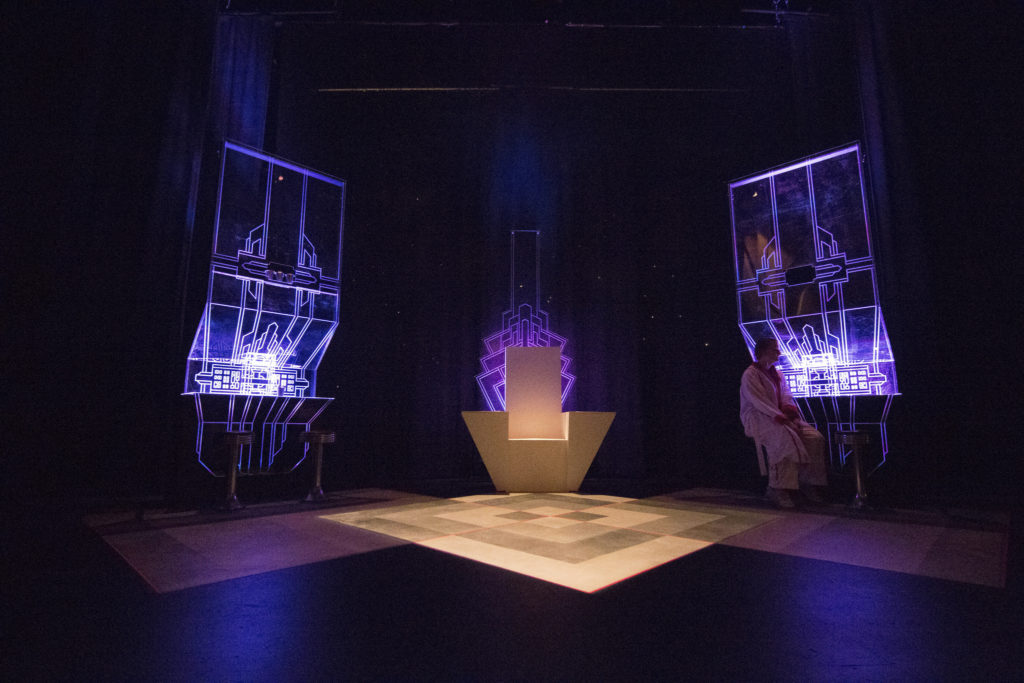 The set of Girl in Space designed by senior Louis Bailey, with lighting design by Koty Jackson.

Skylar Skinner and Charlotte Melville, AERIS and Lana Nelson, both experienced firsts in this play. Girl in Space was the first UT performance Charlotte has participated in, “I’m glad this was my first performance. It is weird being on stage by yourself, though. You want to look at the person, but Skylar is off stage so it’s a challenge to talk to someone who isn’t there.” This was Skylar’s first time voice acting. “I’m use to acting with my face,” Skylar explained, but her appreciation for voice acting has grown. She commanded a lighting system that brought AERIS, the ship computer, to life while she gave her lines. And, if the lights were on you could see her face still acting with just as much emotion as if she was on stage.

Everyone felt that their creative mind was given a place to flourish and an opportunity to gain skills without being bound by their major. University Theatre is open for any student, regardless of major. Usually students can only participate as a cast, or an assistant to crew. The Creative Artist Award allows for more growth in a field of either passion or a future career. The stage manager Ian Oehring put it best, “I think the creative artist award is the final step in being involved in UT. In my time here I’ve done like soundboard, projection, acting, stage manage, and set design. I don’t know anywhere else I could learn two or more of those. UT provides the opportunity and staff support to try multiple opportunities. I love theatre, and am going into accounting, but having this opportunity to explore more areas is something I’m beyond grateful for.”

Having a place to think about why you are choosing your creative choices, learning to operate on a self-created schedule, have a respect between peers, and see the final result of your months of effort is only part of what the Creative Artist Award does. It creates a platform for up-and-coming playwrights to test their ability to write. It gives students a chance to go beyond a normal theatre program. It gives lifelong connections and real-world learning. “We all learned so many things together as we went along,” Lindsay said every word with the utmost respect for what she was doing. I don’t believe words can express the true gratitude and experience of the Creative Artist Award. It influenced all eleven students in ways I cannot include in this article, it’s something students will have to experience themselves. This year 16 entries were submitted to the award (the highest amount in the existence of the award), and results will be announced in late April. If you are looking for a challenge, or a way to explore your career aspirations, see how to get involved in University Theatre’s Creative Artist Award next year.