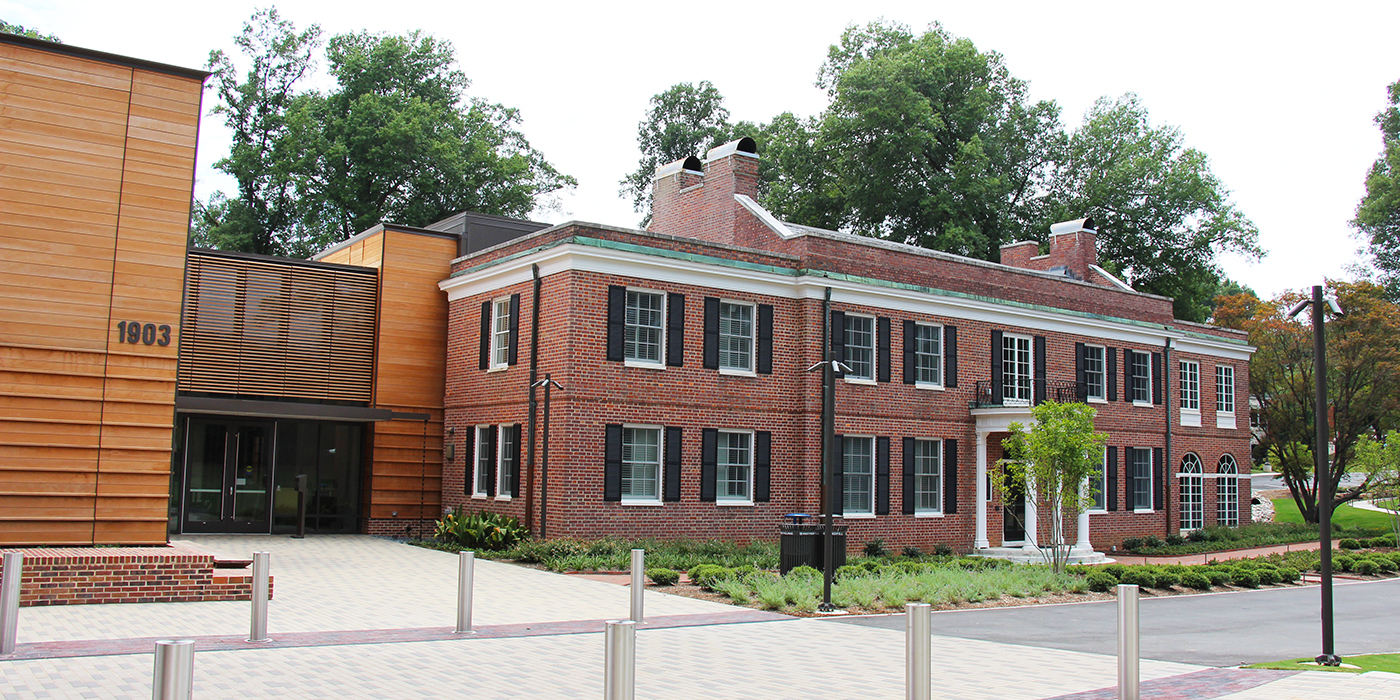 Closed for construction since 2013, NC State University’s Gregg Museum of Art & Design will reopen with a day of activities

On Saturday, August 26, 2017, a longtime dream comes true. The Gregg Museum of Art & Design will open its doors at 1903 Hillsborough Street in Raleigh, in sight of NC State University’s revered Memorial Belltower. For the first time, the Gregg Museum will have a standalone facility, prominently located at a major gateway of the NC State campus.

Too long a “hidden jewel” at NC State University, the Gregg will now be open and accessible to everyone on campus and beyond as a hub of art, discovery and learning.

The August 26 celebration marks the day when the Gregg first invites students, faculty, staff and the public to come and explore its galleries, artworks and gardens. The day of free events will begin at 10:00 a.m. with a ribbon-cutting ceremony followed by exhibition viewings, family-friendly activities, artist demonstrations, tours and performances. Opening day events will run from 10:00 a.m. until 3:00 p.m.

In addition, the opening celebration will celebrate a piece of NC State’s history through the reimagining of the site of the historic chancellor’s residence. Together with an addition designed by architects Perkins+Will and landscape architects Surface 678, the historic residence and its grounds will now serve as a permanent gathering and learning space for all members of our community.

On opening day, the Gregg will unveil the first three major exhibitions in its new galleries. The largest of these will feature highlights from the museum’s permanent collection, accompanied by an exhibition of abstract paintings by Raleigh native Herb Jackson, and another show of Native American art and artifacts from one of the Gregg’s largest gifts. (See exhibition details below.)

A tour of the outdoor spaces will include the new pollinator garden, designed and installed by NC State students from the Department of Horticultural Sciences, in collaboration with the TH!NK Program, and made possible by a grant from Bayer CropScience.

The Gregg is NC State’s collecting art museum, and one of six programs of Arts NC State within the Division of Academic & Student Affairs. With more than 35,000 objects, the Gregg holds the largest and most diverse collection of art and artifacts of any university museum in the state, and uses those objects as tools for teaching and inspiration for students and faculty across all of NC State’s colleges.

Presenting six to eight exhibitions a year, the Gregg has never charged admission and has always made its programs and collections accessible to everyone. Yet only now will the museum begin to realize its full potential as a campus and community hub and incubator of bold and creative ideas.

Construction on the new Gregg Museum began in 2015 following a successful $4 million private fundraising campaign that generated support from nearly 400 individuals. In addition, student fee funding, other university funds and major support from both the City of Raleigh and Wake County made building the new Gregg possible. The total project cost was $9.5 million.

The museum is sited at the historic chancellor’s residence at 1903 Hillsborough Street. Gardens, lawns and majestic trees beautify the grounds, creating inviting indoor and outdoor spaces in which to gather, study and learn. Design of the contemporary addition began in 2011 when the contract was awarded to The Freelon Group, founded by NC State College of Design alumnus Phil Freelon. (The Freelon Group joined Perkins+Will in March 2014.) Kenneth Luker of Perkins+Will was the lead designer for the Gregg, and the firm’s Derek Jones was the project principal overseeing the design team.

The former chancellor’s residence was designed in the 1920s by renowned architect Hobart Upjohn, who was known for a large number of ecclesiastical and educational buildings in New York and North Carolina. The Georgian-style brick house served as the official residence of all NC State chancellors from 1928 until 2011.

The Gregg Museum of Art & Design has been offline since 2013, when it closed its former galleries to accommodate the renovation of Talley Student Union. As a result, many students, faculty, staff and members of the community have never experienced the museum. The opening celebration will introduce visitors to “a day at the Gregg,” where they will experience a snapshot of the kinds of programs and exhibitions that the museum will soon hold throughout the year. Every activity, demonstration and performance will reveal something new about the museum while providing an opportunity for inspiration and creative thinking.

The Gregg Museum was one of the first extraordinary places completed as part of NC State University’s Think and Do the Extraordinary Campaign, creating extraordinary opportunities and experiences that benefit our students, campus and community.

About the Opening Exhibitions

On display in the Adams and Woodson Galleries, August 26-December 30, 2017

Show & Tell explores the vast range of human creativity represented by the more than 35,000 objects that comprise the Gregg Museum’s permanent collections. From disguised war maps and iconic industrial designs to New Guinea body masks, even long-term fans of the Gregg will discover plenty of surprises among the objects on view.

The Show & Tell exhibition includes a selection (about 150 objects) from among nearly 500 items featured in a new book about the collection by the same title. Both the book and exhibition represent the range of the Gregg’s holdings. Not a “treasures of” show so much as a sampler, objects are gathered from the many different areas in which the museum collects, including ceramics and glass, design, fine art, fine craft, furniture, outsider art, photography, textiles, garments and accessories, social and domestic objects, archaeological artifacts and ethnographic materials.

A DOOR IS NOT A WINDOW
Herb Jackson paintings

This presentation features major abstract works from the past two decades by Raleigh native Herb Jackson, one of North Carolina’s premier contemporary artists. The exhibition employs special lighting made possible by support from Wells Fargo.

Herb Jackson was born in Raleigh, North Carolina, in 1945. He cannot recall a time when he was not busy painting and drawing, but remembers beginning to sell his artwork by the time he was ten or eleven. In 1962, he won first place in the North Carolina Artists Exhibition, an annual juried show for state residents sponsored by the North Carolina Museum of Art, while he was still a student at Broughton High School. The runners-up were art professors with established careers and decades of experience. A local art critic dismissed the teenager’s win at the time as merely a lucky “fluke.”

Many years after Jackson had won his first award at age seventeen – and long after his reputation had achieved national status – he finally received a retraction and apology from the critic who had downplayed his early win. “You were no fluke,” the former critic admitted.

In 1999, Jackson received the North Carolina Award, the highest civilian honor in the state. In 2015, he was given the North Caroliniana Society Award for extraordinary contributions to the state’s cultural heritage. Jackson’s work is now in more than 80 collections, including the Baltimore Museum of Art; the British Museum; the Brooklyn Museum; Chicago Art Institute; Museum of Fine Arts, Boston; Philadelphia Museum of Art; Victoria and Albert Museum, London; and the Whitney Museum of Art, NYC. A Door is not a Window is his first museum show in his hometown in many years.

The title of the exhibition comes from an explanation Jackson once offered about his work. “The history of narrative painting,” he said, “is based on representing a reality as if were viewed through a window, whereas I am interested in presenting a new entity that one enters, as if by a door.”

TREASURES OF NATIVE AMERICA
Selections from the Drs. Norman and Gilda Greenberg Gift

This exhibition includes silver and turquoise jewelry (displayed in special visitor exploration drawers), Navajo weavings, Hopi katsinam, Apache basketry, Pueblo pottery and Northwest Coast masks. Together, they offer a glimpse into the riches of the Greenberg Collection, a major recent donation to the Gregg Museum.

After serving in the Marines in the South Pacific in World War II, Norman Greenberg played French horn with the New York Philharmonic, was first horn in the Radio City Orchestra, and for seven years was first horn for the New York Brass Ensemble. At the same time, he pursued parallel interests by earning degrees in sociology and anthropology at Columbia University, while his wife, Gilda, completed master’s degrees in counseling at NYU and in social and philosophical studies at Columbia.

In the late 1940s, the Greenbergs began traveling to the Southwest, where their encounters with Native Americans convinced them to seek careers in public service that would allow them to expand their cross-cultural experiences. In 1953, they accepted positions with the Bureau of Indian Affairs in New Mexico. Living in a very remote part of the state, they established a government school for non-English-speaking Navajo children. While there, they also began acquiring locally made art objects and artifacts that, over the decades to come, would eventually expand to become a major collection. Gathered over nearly sixty years and representing some twenty-two Native American cultures, many of the pieces were acquired from the native makers while they were still living on their ancestral lands, pursuing traditional lifeways and speaking their original languages.

In 2005, the Greenbergs retired to Durham, NC, where they soon got involved as fans and supporters of the Gregg, and eventually decided to support the museum with a major gift. In 2009, they began donating Native American art objects, followed a year later by the establishment of an endowment bequest representing a sizable portion of their financial estate to create a permanent “Drs. Norman and Gilda Greenberg Native American Art Study Center” at the new Gregg. Still in its infancy, it already includes hundreds of artifacts and thousands of anthropological slides, books, files and other research materials. It is the only center of its kind in the state.