The Patron Perspective: Roy Cromartie ’74 and Paul Fomberg lead the effort to honor John McIlwee with a $25,000 gift 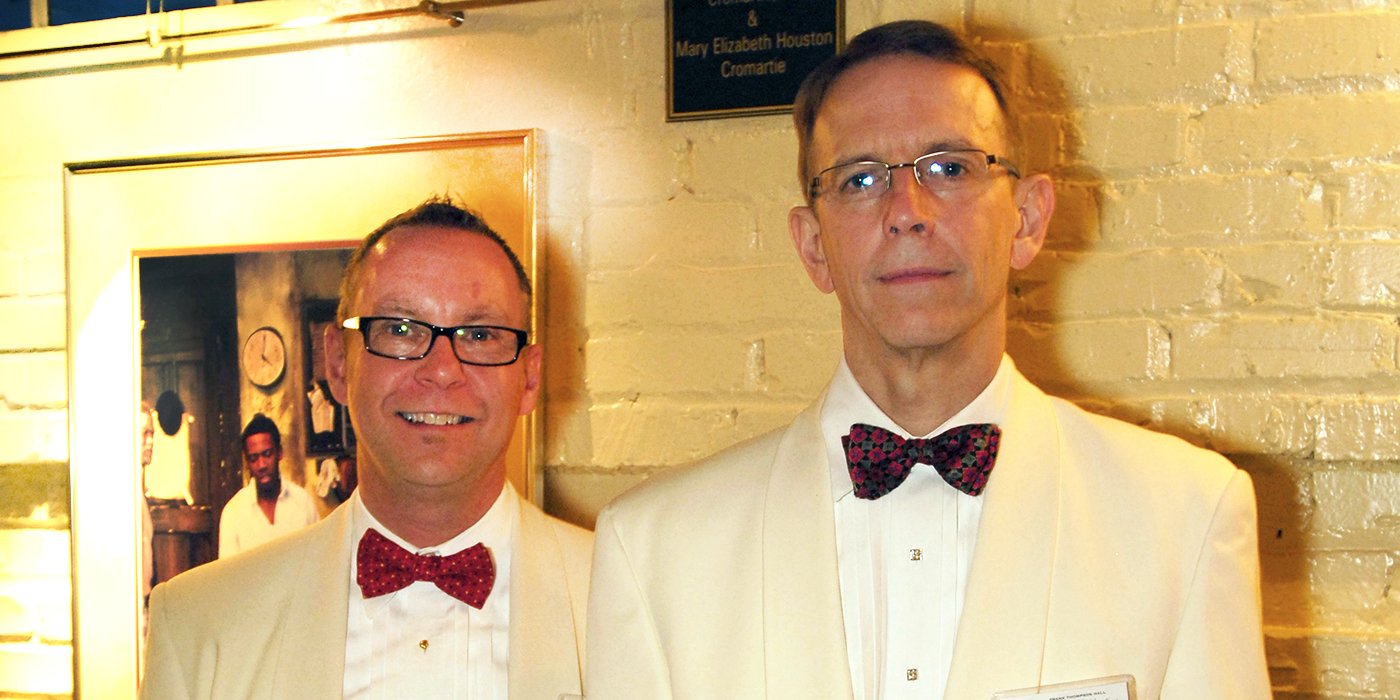 Paul Fomberg (left) and Dr. Roy Cromartie in front of the window they named in Thompson Hall for Roy’s parents. Paul and Roy are longtime supporters of the University Theatre program.

The John C. McIlwee Endowment was established in 2001 to honor John McIlwee and to create a reliable and ongoing source of income for University Theatre (UT). As John nears his retirement in June after three decades with the theatre program, alumni and patrons are gathering to double the endowment by raising $100,000. Roy Cromartie and Paul Fomberg are leading the effort with a $25,000 commitment. Roy is a physician at Rex Hematology Oncology Associates and a graduate of NC State’s College of Sciences. Paul is a retired Senior Restoration Specialist at the North Carolina State Historic Preservation Office and a current member of the Friends of Arts NC State Board of Advisors. They spoke to Arts NC State about how they got to know John and his work at University Theatre, why they are loyal patrons of UT’s performances, and why an endowment is the best way to cement John’s legacy at NC State.

How did you first meet John McIlwee and become familiar with his work for University Theatre?

You are longtime patrons of University Theatre, and Paul is a former president of the Theatre Endowment Board and a current member of the Friends of Arts NC State Board. Why is the University Theatre program important to you? What keeps you coming back to the program’s performances?

We enjoy live theatre and other arts performances. We travel to New York frequently to see new shows on and off-Broadway, as well as attend various local theatre performances. What keeps us coming back to UT is the quality of the performances, including the sets, costumes, etc., and the talented students from many diverse colleges and majors at the university.

Do you have a favorite University Theatre performance or memory?

Hairspray this season was phenomenal, as was Fiddler on the Roof a season or two ago! And the summer Theatrefest productions are always fun. John has a talent for presenting shows in a new way that will appeal to both the student participants and the audiences, such as when he presented Pippin with the cast dressed in leather and latex, and the very sensuous version of Dracula that he directed several years ago. John occasionally acts in some of the productions.

How has the program evolved under John’s leadership?

The University Theatre staff has grown tremendously over the years, and the productions have become even more professional with the very talented staff.

You helped establish the John C. McIlwee Theatre Endowment in 2001, and now you have chosen to make a lead contribution to the endowment in honor of John’s retirement. Why is building this endowment the right way to honor John’s service to University Theatre?

John’s dear friends Charlie and JoAnne Dickinson of Boston (JoAnne is a frequent actress in Theatrefest) made the initial donation to the McIlwee Endowment, and they asked us to also make a donation in John’s honor at that time. With his impending retirement, we felt that a gift to the endowment would ensure John’s legacy at NC State and would encourage others to contribute.

Why should other patrons and alumni contribute to this endowment?

Again, we feel that contributing to the endowment will ensure John’s legacy at NC State and will provide funds for the University Theatre program in perpetuity. UT is funded through ticket revenue and student fees, which do not cover all of the costs of the program. Private donations are crucial in continuing the program. With an endowment, the principal remains intact while the investment income from the principal is available for use, which means that the endowment grows over time and provides an increasing source of income in perpetuity.

What are your hopes for University Theatre’s future? How will the John C. McIlwee Theatre Endowment help realize that future?

With such an amazing staff, we feel comfortable that University Theatre will continue to present entertaining and thought-provoking theatre for the university community and the greater Triangle community for years to come. We know that John will not be sitting at home watching TV in his retirement, but will continue to be involved with UT in the future. The McIlwee Endowment will provide income for the program to continue.

What is something everyone should know about John?

John is very modest, but he is a wonderful lecturer on theatre and fashion, and he really cares about the students and about providing a creative outlet for engineering and computer science and animal science students (and all other majors) outside of their rigorous academic programs. In doing so, he has helped to make their education at NC State a more well-rounded experience.

To join Roy and Paul as donors to the John C. McIlwee Theatre Endowment, visit go.ncsu.edu/mcilwee to learn more and to make an online gift.