On October 25, 2018, Arts NC State at NC State University hosted an event to honor the 2018 Creative, Performing and Visual Artist Award recipients. These awards celebrate NC State University students from across the university’s colleges who exhibit extraordinary creativity and mastery of their craft. The Creative Artist Award recognizes students who have written, composed or choreographed an outstanding piece of original music, theatre or dance, while the Performing Artist Awards are given to exceptional student performers. Arts NC State program directors and faculty select each year’s winners, who receive cash awards. The Visual Artist Award honors an NC State student for their outstanding work in the visual arts. The artist’s work is selected at the annual Student Art Sale, and the winner receives a cash award. Their piece is displayed prominently in Talley Student Union for the following year.

Adrian Haywood received the Creative Artist Award in the category of Dance for his original duet titled “Vincent” that is centered around the concepts of unity, goals, and legacy. It is influenced by the Latin word vincentius (conquering) as well as the life of Vincent Van Gogh. According to Dance Program Director Tara Mullins, “The piece has interesting thematic content, dynamic movement vocabulary which leads for a strong potential for development.” His piece was performed in the Dance Program’s Fall 2018 concert.

Dedreanna Scott received the Creative Artist Award in the category of Dance. She submitted a solo “There is Still Time” based on the quote “One should cultivate good habits of memory, for it is capable of making existence a paradise or an inferno,” by Baltasar Gracian. According to Dance Program Director Tara Mullins, “Her solo shows strong thematic content, original movement vocabulary and potential for incredible development.” Her piece was performed in the Dance Program’s Fall 2018 concert.

Noah Baldwin’s work for concert band titled “Carolina” was selected based on the level of accomplishment and promise shown by a young composer preparing programmatic work of this nature and in this medium. The faculty panel noted Noah’s interesting use of color changes, in particular through the contrasted use of woodwinds and brass. The NC State Wind Ensemble will premiere Noah’s piece in spring 2019.

Although the staff and students at University Theatre know of Natalie’s many acting successes, they were deeply moved by the thematic scope of her award-winning play, “A Good Little Rain.” According to former University Theatre Director John Mcllwee, “She has given us a life’s journey compacted into the brief moments of a creative and intellectually vibrant character that many young women today will find relatable and cathartic. Other audiences will not help but be awed by Natalie’s stimulating dialogue and situation. She has taken old theatrical forms and given them new relevance with her unique word play. The poetic sensibility of this piece is moving and displays a very mature hand at writing; it is unexpected, and yet, completely what would be expected from a young woman of many facets and the ability to share them with a well-developed theatrical passion.”

MaryJo McCoy received the Performing Artist Award in the category of Dance for her work in “All That Ever Falls.”  Her sensitive and intuitive work as the soloist for that piece allowed her to stand out in the NCSU Dance Company concert. The piece deals with self-forgiveness and redemption, and according to director Tara Mullins, “MaryJo understood this content on a deep emotional and intellectual level, performing each time with maturity and subtle nuance.”

Jasmine Rouse received the Performing Artist Award in the category of Dance. According to artistic director of Panoramic Dance Project Francine Ott, “Her work in the Panoramic Dance Project has been incredible, and her passion and commitment to the art of dance stands out when she is in rehearsal and on stage. Her performance as a soloist in both Clarice Young’s ‘I Am Going’ and Ana Maria Alvarez’s ‘Agua Furiosa’ was intense, engaging and embodied the layered content of both pieces with maturity.”

Helena was selected for the Performing Artist Award in voice for her work in the preparation and performance of her final recital for music minor on April 21, 2018. Her performance included a variety of musical selections ranging works by the 17th century composers Marco Antonio Cesti to excerpts from Lerner & Loewe’s musical “Camelot” and Lin-Manuel Miranda’s “Hamilton.” The reviewing faculty commented on Helena’s exceptional preparation of a diverse program of vocal selections.

Daniel was selected for the Performing Artist Award for piano for his work in the preparation and performance of his final recital for the music minor given on April 29, 2018. His performance included works by three 20th century composers, Margaret Bonds, William Bolcom, and Alexander Scriabin. Of particular note was Daniel’s performance of Scriabin’s Sonata No. 9, “Black Mass Sonata” which is considered to be a highly demanding work, both technically and musically, for the pianist.

Natalie Sherwood has been an extremely dedicated student artist for her entire involvement with University Theatre. The acting/directing staff in particular have learned to anticipate theatre magic when she takes on ANY role! This season has shown Natalie to be a versatile actress with her touching dramatic role in “The Exonerated,” which received raves, and her exceptional comic turn in ”Hairspray.”

According to director of the Gregg Museum of Art & Design Roger Manley and judge of the 2018 Visual Artist Award, “Emma Simon’s piece, ‘Clowning Around’, was chosen because of its strong graphic sense of spatial depth, pattern, and color; all of it had been held under just enough, not too much, control. In the way that it somehow manages to be both playful and confident, I’m reminded of works by major 20th century figures like Alexander Calder, Emil Nolde, Jean Arp, and Karel Appel, yet her piece doesn’t seem directly derivative or imitative of any of those artists. In Emma Simon’s print, the energy comes from how it pits a clownish array of emotions (ranging from anger and shock, to despair and horror) against blobs of bright primary colors and misaligned wigs, rendering it unpretentious and unfussy, and yet fresh, fun, and delightful.” 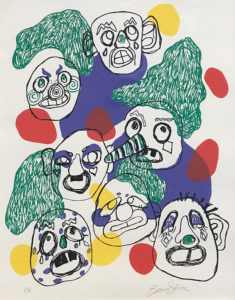