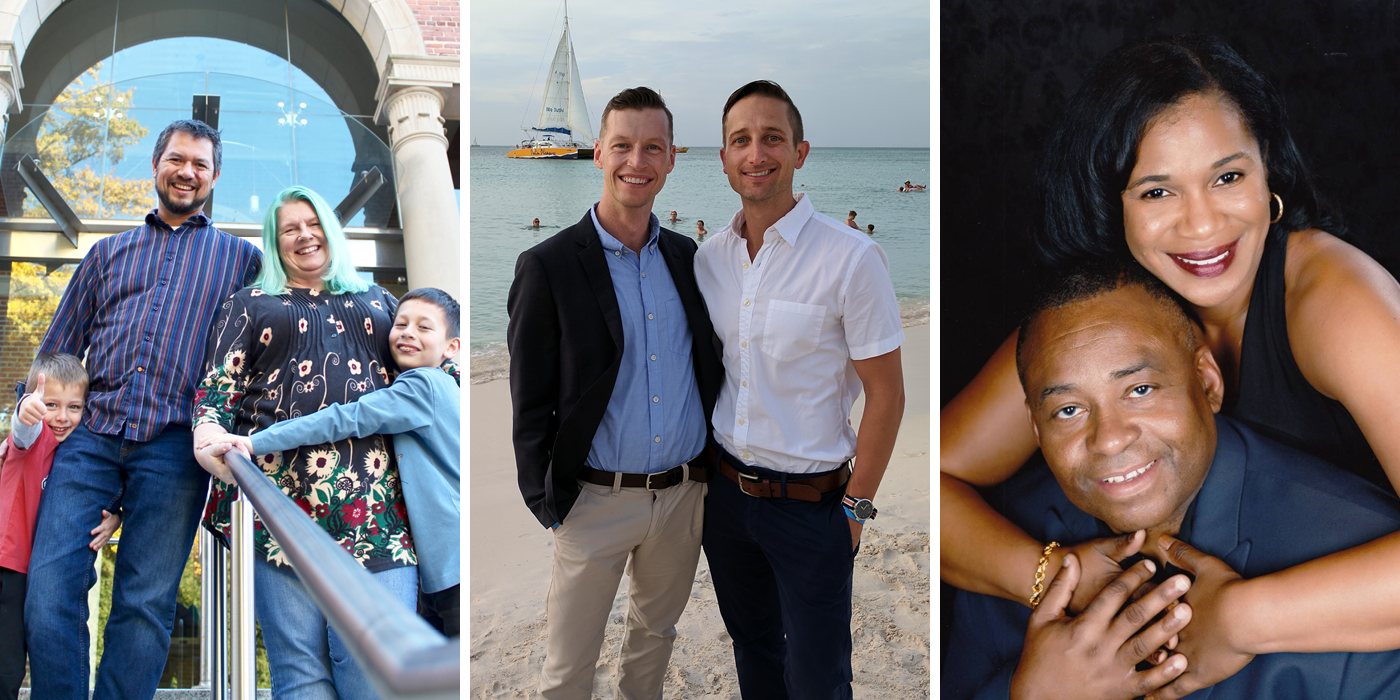 L-R: Linh and Mette Schladweiler with their sons Maxx and Jackson, Keith Lunday and Jason Renzaglia, Fred and Belinda Alexander

Three couples who met through the arts at NC State

It might seem incongruous for a university best known for cultivating world-class engineers, scientists and entrepreneurs to also have truly remarkable arts programs. But we all know NC State is living proof that chemical engineers can be sensational singers, accountants can really act and software designers can play extraordinary piano. But who knew arts at NC State could also be an incubator for lifelong love matches?

Longtime fixtures on the Raleigh arts scene, Mette and Linh Schladweiler were both musical theatre and band geeks throughout high school. You could say the arts are in their blood. They met in the ‘90s working backstage on different shows being staged by NC State University Theatre, and that fateful meeting would be the genesis for a whole new generation of theatre and band geeks.

Linh spent his high school years in Rocky Mount, where he performed in school musicals, played brass in the marching band, and performed in The Cavaliers Drum and Bugle Corp in both high school and college. His first job was in the ticket office of the North Carolina Symphony. “I would pack my lunch and spend lunch hour watching the symphony rehearse. It was great,” says Linh. Mette was born and raised in North Carolina and spent her high school years, much like Linh, playing in her high school marching band in Hickory and thoroughly ensconced in the theatre gang.

Mette, who earned a B.S. in zoology from NC State and Linh, a B.A. in accounting, felt a spark ignite during rehearsals of performances they were stage managing in 1996. “I asked Linh out,” laughs Mette. “He had never seen Sunset Boulevard, so I made him dinner at my apartment and we watched it.” How fitting that their first date was spent watching a classic movie about actors.

The two quickly became a couple, and their lives together centered around the arts. They developed a tight-knit circle of friends in the on-campus theatre community and both worked backstage as well as performing. They participated many years in the beloved holiday madrigal dinners hosted by NC State.

When they decided to tie the knot, of course they were married on the main stage at Thompson Hall. “We asked friends, instead of giving gifts, to perform at the wedding,” says Mette. And they did, including long-time director of University Theatre, John Mcllwee. 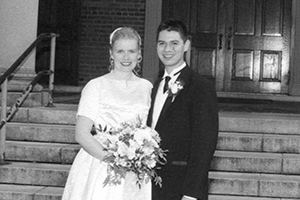 Mette and Linh Schladweiler outside the old Thompson Theatre on their wedding day in Sept. 1999

Despite their passion for the arts, Linh and Mette would go on to very different careers. Mette is a biologist for the EPA, doing environmental research, and Linh is the IT director for an insurance agency. “We work so that we can do all the arts-related things we really love,” says Linh. Mette adds, “I think my experience with Arts NC State has made me appreciate art wherever it is.”

Both believe the atypical nature of the theatre program at NC State, which doesn’t offer a theatre major, actually enriched their experience there. “You had students in accounting and forestry and communications and hard sciences,” says Linh. “All these varying backgrounds – not just candidates for MFAs – it shaped our experience in a different way.” Mette remembers an alumnus of the theatre who strongly encouraged all engineering students to take a theatre class. “He told them it would help them in their day-to-day life no matter what they did,” says Mette. “And I think that’s true.”

After 18 years of marriage, Mette and Linh remain the same theatre and band geeks they always were. Linh teaches the marching band at Holly Springs High and both have, over the years, performed and worked backstage for numerous companies, including Theatre Raleigh, Theatre in the Park, Raleigh Ensemble Players and Manbites Dog Theater. But their heart has always been with Arts NC State. One or both of them has been involved with summer’s TheatreFest every year. Linh played the role of Sandy Tyrell in 2017’s Hay Fever.

And now they’re raising two new additions to Raleigh’s arts community; sons Jackson, 11 and Maxx, 5 have been backstage fixtures, and even made appearances on stage, at University Theatre productions, since they were in diapers. “It’s funny,” says Mette. “I have a whole circle of friends from those early days with NC State that we never would have had if not for the arts.” They’ve gotten married and had kids together, and remain a tight community. John and Nancy Mcllwee are like family and are godparents to Jackson and Maxx.

“University Theatre and NC State – that’s my true love, says Mette. “That’s where I grew the most, and that’s where we continue to grow and learn.”

Jason Renzaglia and Keith Lunday were two chemical engineering majors at NC State who never took an engineering class together. But they did sing together in the Music Department. And it was their shared love of music and NC State that kindled the flame for these two North Carolina natives.

Even though he always thought of himself as a science guy, Keith grew up singing in his church choir near Pinehurst. Jason describes himself as a “total chorus nerd,” who sang in a barbershop quartet in his hometown of Wilmington. He wondered when he left for college, “Will I have anywhere to sing?”

Jason sought out Arts NC State and quickly joined the Varsity Men’s Glee Club. Keith soon followed. “We sat next to each other for the 2:35 p.m. rehearsals on Monday, Wednesday and Friday,” says Jason “and became friends at first.” Keith remembers the “cute guy who sat next to me in choir.” Jason also sang with Grains of Time, the renowned NC State men’s a cappella singing group, and convinced Keith to audition and join the group as well.

Their singing drew the two closer, and one fateful night (November 11, 2000, according to Jason), they met at Mitch’s over a pitcher of Miller Lite. “I thought we were just going to hang out,” says Keith. “Actually, Keith thought I was going to ask to date his sister,” said Jason. The evening would end with the two coming out to each other. And the rest is history. For their first anniversary, Jason gave Keith a Mitch’s Tavern Miller Lite pitcher.

“It really was perfect timing for Keith and me,” says Jason. “We were both just coming out to friends and family, and we could really share the ups and downs and lean on each other. It really formed our relationship.” 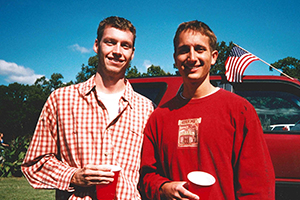 After graduating, Jason moved to New Mexico for his first job out of college, but would return to Raleigh in just 19 months because, according to him, “I just could not keep away from Keith.”

The pair joined the North Carolina Master Chorale, under the direction of their former music professor, Al Sturgis. “Music really has been and continues to be at the core of our relationship,” says Jason. They were married in Boston in 2011.

Like the Schladweilers, Jason and Keith formed strong and lasting bonds with their fellow music lovers at NC State. “They all sang at our wedding,” says Keith, “and we sang at theirs.” The two are godparents to two children of a fellow Grains of Time member.

They still get together with their Grains buddies and sing, and they tailgate together at Wolfpack football games. “NC State was really a big part of the foundation of what we are today,” says Jason.

Music was always in the air for Belinda and Fred Alexander. They were raised immersed in it. It’s what brought them together, and it’s a foundation of their family life today.

North Carolina natives, Belinda and Fred are both ministers’ children who grew up singing in the choir, Fred in Charlotte and Belinda in Wendell. Fred played trumpet in his high school’s marching band and Belinda sang in the chorus. “Music was just always around me,” says Belinda. 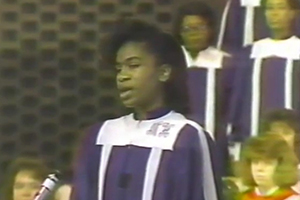 Belinda Alexander singing in a New Horizons Choir performance that was broadcast by WRAL.

They met in the ‘80s at NC State. They became close friends after sharing a class together and hung out with the same group of musically inclined students. One day, Belinda needed a ride and found Fred noodling on the piano in a practice room on campus. He told her the price of the ride would be to help him finish writing his song. Belinda started singing along and added one line. “After we finished, Fred said, “Will you marry me?” laughs Belinda. “I didn’t take him seriously, but it did get me thinking.” They would indeed go on to get married, some 26 years ago in Raleigh. And the song they wrote together, “Never Knew Love,” was sung at their wedding. (Belinda is listed as a co-writer, even though she only wrote that one line.)

But if it hadn’t been for a mishap during an intramural basketball game, Fred would never been the one to steal Belinda’s heart. Fred was a trumpet player, and Belinda says she had prayed all her life, since she was a little girl, that she would marry someone who could play the piano and sing. An errant elbow to the face would change the course of Fred Alexander’s life. A severely swollen lip meant he couldn’t play the trumpet, so he quickly took up the piano. “God busted my lip for a reason,” laughs Fred. 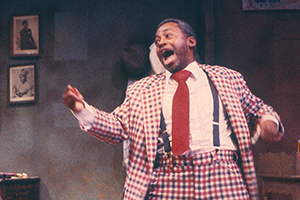 Fred acted on the main stage at Thompson Theatre in the first Black Repertory Theatre production in 1987, Ma Rainey’s Black Bottom, and in the 1988 production of Ceremonies in Dark Old Men. “He got me comped tickets, as I recall,” says Belinda. She performed in the 1989 production of The Amen Corner, and both sang in the renowned New Horizons Choir. The choir was a performance ensemble of the NC State Music Department from 1982 to 2007 and specialized in contemporary gospel music and Negro spirituals.

“I’m naturally a reserved, introverted person,” says Belinda. “Being involved with the arts and performing opened me up. Singing was the thing that drew me out.”

Fred, an electrical engineering graduate, went on to a career in software development, first with IBM and now with a spinoff of Big Blue, Fiserv. Belinda earned her degree from NC State in education and has taught and tutored in their longtime hometown of Charlotte.

Both are still very steeped in the performing arts. They are ministers of music in their church. Fred still acts and Belinda writes and directs plays. Their three children, Tre, 24, Jackson, 20 and Bria, 15 also play instruments, sing and act as well. Together they sing as the Alexander Alliance. And Belinda and Bria recently performed in the gospel musical Daughter of the King at the Atlanta Black Theatre Festival.

“What we got from Arts NC State,” says Fred, “all the things we learned from the programs at State – we have taken that and were able to touch so many other lives.”

Kelly McCall Branson is a freelance writer who has written about the arts, dining, travel, sustainable living and home building for regional and local publications throughout the Southeast.

This article was originally published in the Spring 2018 issue of #creativestate, the official magazine of Arts NC State.

NC State University Executive Director for the Arts Rich Holly provides thoughts about time for those in the arts.