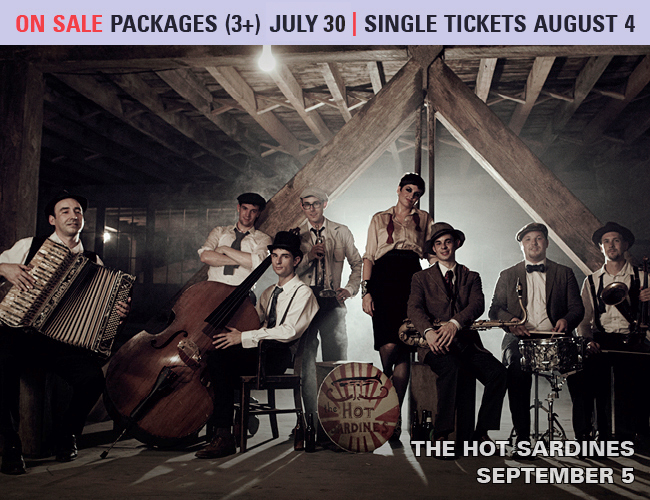 Take a blustery brass lineup, layer it over a rhythm section led by a stride-piano virtuoso in the Fats Waller vein, and tie the whole thing together with a one-of-the-boys frontwoman with a voice from another era, and you have the Hot Sardines. (We haven’t even told you about the tap dancer yet.)

In a short time, the Hot Sardines have gone from their first gig – at a coffee shop on the last Q train stop in Queens – to selling out Joe’s Pub five times in as many months, headlining at Lincoln Center’s Midsummer Night Swing, and opening for the Bad Plus, Lulu Gainsbourg and French gypsy-jazz artist Zaz.

Through it all they’ve become regulars at the Shanghai Mermaid speakeasy and turned The Standard, where they play regularly, into their own “saloon in the sky” (The Wall Street Journal) – complete with tap dancing on the bar – honing a live persona that’s been called “unforgettably wild” and “consistently electrifying” (Popmatters).

The Sardine sound – wartime Paris via New Orleans, or the other way around – is steeped in hot jazz, salty stride piano, and the kind of music Louis Armstrong, Django Reinhardt and Waller used to make: straight-up, foot-stomping jazz. (Literally – the band includes a tap dancer whose feet count as two members of the rhythm section).

They manage to invoke the sounds of a near-century ago and stay resolutely in step with the current age. And while their roots run deep into jazz, that most American of genres, they’re intertwined with French influences via their singer, who was born and raised in Paris (and writes songs in both languages).

The band was born when said Parisian (“Miz Elizabeth” Bougerol) met a stride piano player (bandleader Evan “Bibs” Palazzo) at a jam session they found on Craigslist. Above a noodle shop on Manhattan’s 49th Street, they discovered a mutual love for songs from the 1920s, ’30s and ’40s that no-one really plays anymore. Or if they play them, “they handle them with kid gloves, like pieces in a museum,” says Evan, underscoring a point the pair can’t stress enough: “This music isn’t historical artifact. It’s a living, breathing, always-evolving thing.”

Pre-Show: The evening gets a riotous kickoff with a performance by Raleigh’s own Sidecar Social Club, beginning at 6:30pm in the Talley Student Union.

“Of all the Hot Jazz groups, the Sardines have probably come the furthest […] they’ve assembled a unique repertoire, and a sound and a style that are distinctly their own.”  – from How a Swath of 20-Somethings Have Tuned Into 1920s Pop in VANITY FAIR, August 2013

“Dixieland has moved on up.” – THE WALL STREET JOURNAL

Find more press quotes, and links to the full articles at http://hotsardines.com/press/