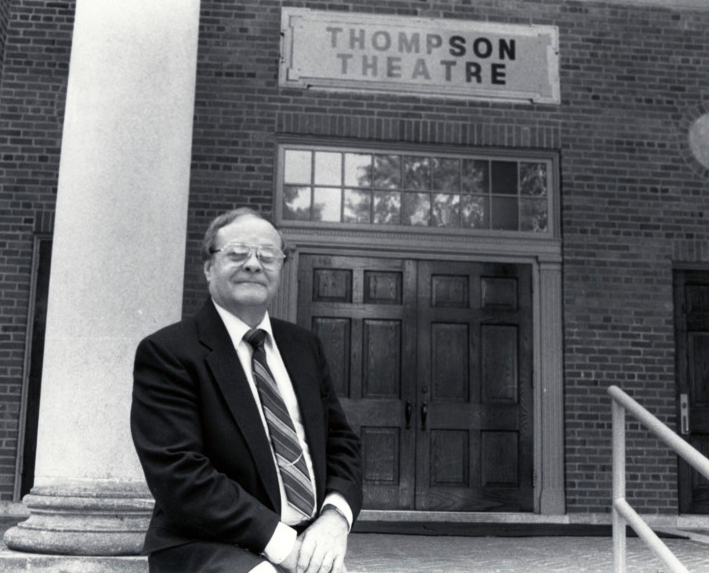 NC State’s fledgling theatre program found a home in 1964, following a low budget renovation of the abandoned campus gymnasium. Thompson Theatre – the new name of both the building and the program – experienced high and lows in the first few years of operation.

In 1973, determined to steady the program, the university hired Charles Martin Jr. as the director. A native of Pennsylvania, Martin served in the Army during World War II, then returned home to attend Millersville University followed by teaching drama in high school. He later moved to North Carolina, earned an MFA from UNC Greensboro, and began teaching theatre at Appalachian.

Charlie Martin, the beloved director of Thompson Theatre (now University Theatre) from 1973 to 1990, died on August 3 at age 95 at his home in Wake Forest.

Martin set the tone for a successful open access theatre program that has grown and thrived ever since. Tom Stafford, vice chancellor for student affairs emeritus, notes that Martin “provided calm and steady leadership to move the program into a productive period. He was all about the theatre and sharing his theatre passion with others.”

Encouraged by strong support from university administration, Martin succeeded in getting theatre classes established so students could receive academic credit for their work. Student theatre participation soared. He founded the wildly popular madrigal dinners that ran for decades until building renovation projects got in the way, and led summer theatre trips to London. After he retired, Martin continued to teach theatre classes for several years, and both directed and performed in TheatreFEST shows (and was noted for his sly comic acting skills).

The many longtime theatre employees that Martin hired included John McIlwee, who ended up succeeding him as director. McIlwee came to NC State as the wardrobe designer in 1986, thinking he would be in Raleigh only a couple of years before returning to professional theatre (he stayed until his retirement in 2018). Fascinated by the work environment at NC State (“Charlie was a revelation”), McIlwee notes that it was unusual to be part of a theatre program that was open to every student on campus. “One thing I always admired about Charlie was his commitment to student success. That doesn’t always happen. He never stopped feeling that way. Students loved him. The main thing I appreciated was that his legacy of student involvement left us something to build on.”

Stafford gives credit where it’s due: “Charlie put University Theatre on a steady path of excellence which has lead to the wonderful theatre program that we have today.”

The photo of Charlie Martin appeared in Technician on September 25, 1989 and was taken by student photographer Debbie Mathis. Image provided by the Special Collections Research Center, NC State University Libraries, Raleigh, North Carolina. Learn more about the Center at lib.ncsu.edu/scrc.

NC State University Executive Director for the Arts Rich Holly provides thoughts about time for those in the arts.