See “STEPS: in response” at the NCSU Dance Company Concert on April 11 and 12

Join us for the final performance of John Cage’s STEPS: A Composition For A Painting with Ray Kass April 11-12, 2019, in Stewart Theatre at Talley Student Union.

Where it All Began

During that time, Ray Kass, the founder of Mountain Lake Workshop, conducted multiple workshops as part of his residency here at NC State.

Master Class: John Cage’s STEPS – A Composition For A Painting with Ray Kass

We teamed up with Ray Kass for one of these workshops – STEPS: A Composition For A Painting on September 19, 2018. 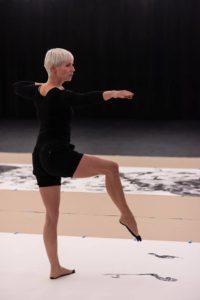 Last Chance to See the Show

After the workshop, Dance Program director Tara Mullins and Health and Exercise Studies dance faculty member Autumn Mist Belk collaborated on a dance and multimedia piece entitled STEPS: in response, which will premiere at the NCSU Dance Company concert April 11 and 12.

The piece touches on the concepts of the soul human figure in nature, John Cage’s ideas of chance, the pattern of the footsteps in the STEPS painting, and the words of inspiration Kass shared with the students. The work also features a film by Belk.

Currently, the Crafts Center is also displaying Revisiting Mountain Lake, an exhibition of student work, including a STEPS painting, with Ray Kass through April 28, 2019. This has been a very exciting year-long collaboration between three Arts NC State programs!